The Awakening happened roughly six years ago and introduced a stunning replayability accompanied with an impressive simplicity and challenging gameplay – ultimately setting the scene for a very solid game in an otherwise seemingly stagnated Tower Defense-genre. Today, after more than half a decade, a humble Kickstarter-campaign and Counter Strike: Global Offensive, developer Hidden Path Entertainment is once again ready to unleash the endless and lethal waves of aliens unforgivably. The only thing left to ask is whether or not the sequel manages to deliver the same way the original did.

Welcome, or rather, welcome back to Defense Grid 2. 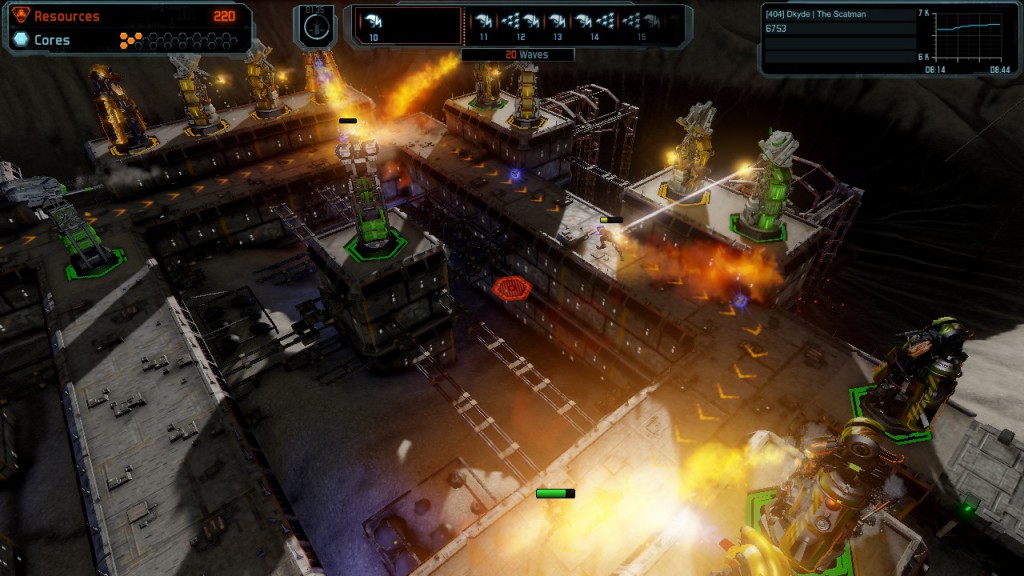 Simplicity is often the road to success, and developer Hidden Path Entertainment has undeniably found their very own path as separated and isolated defense grid systems on the verge of invasion welcomes the player.

By the above statement and screenshot it is likely obvious for returning fans that Defense Grid 2 hasn’t advanced noticeably from The Awakening; nor reinvented the genre by any means. Aliens are indeed still trying to steal your treasured and life-depending energy cores, and you are once again required (and rewarded accordingly) to defend them best possible. However, whilst the core game mechanics and graphics hasn’t changed significantly, Hidden Path Entertainment has managed to refine their product even further through a range of small tweaks and fixes solely focused on creating and improving a smooth, challenging and entertaining gameplay. They have moreover added a humorous and fully voiced (though, and lets face it, very frivolous to the actual campaign) story as well as twelve (!) different game modes to encourage a whole new level of replayability.

It is evident that Defense Grid 2 utilizes a ton of content originally created in The Awakening. However, it is important to stress that re-using and drawing inspiration from previous games when creating a sequel is not necessarily a bad thing – in fact it can be a very appealing and useful approach. By welcoming veteran players with known and well-loved elements of nostalgia, a developer is able to jump-start the community by having the veterans foster it. Defense Grid 2 is a great example of this, and new players will thus be welcomed by a lively Steam Community Hub, thousands of veteran players and an active developer. 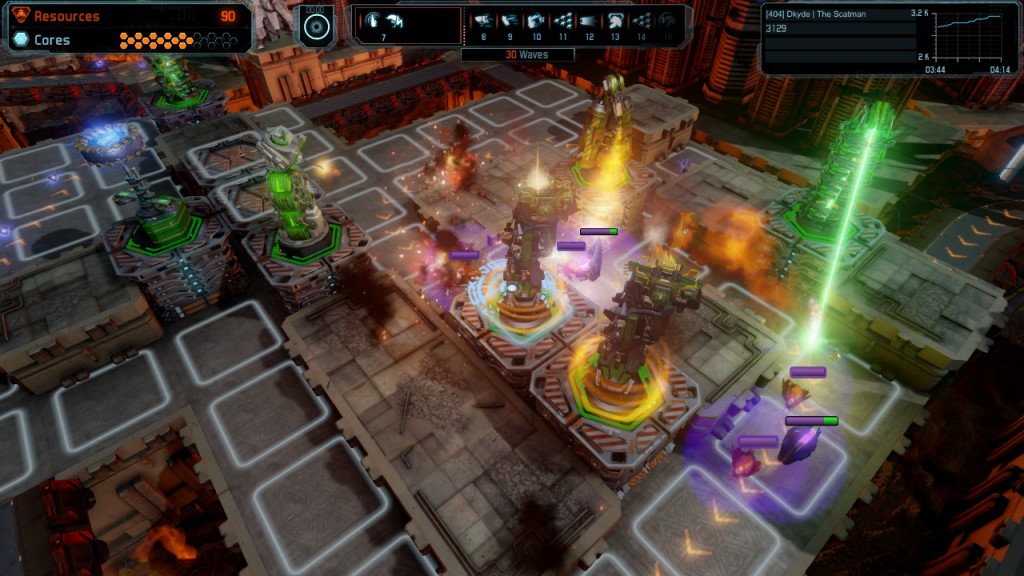 The difficulty drastically increases and will prove a challenge to many veteran players as well.

However, despite the strong parallels to the original game and guaranteed nostalgia trips for veterans, Defense Grid 2 depends on attracting new players to whom all the aforementioned changes means nothing as they haven’t played the original. This ultimately means that if you haven’t played The Awakening, you will experience the game as it is. What new players will find is a game which graphically appears slightly outdated, but nonetheless feels very solid.

A natural question would then be what a solid game is? The gameplay in Defense Grid 2 is arguably very straightforward and seemingly quite simple – but do not get fooled! Whilst the player indeed is required to defend best possible by utilizing up to ten different and unique towers from several waves of aliens, the difficulty increases significantly and almost exponentially. The drastic increase in difficulty is both very motivating and infuriating, but nonetheless greatly improves the replayability as just one wrong tower, a mistimed upgrade or a missed special-attack effectively can result in the game being lost. Furthermore, the towers, aliens and map design seem to have accomplished some sort of harmony with the gameplay and controls as it all works really well together. 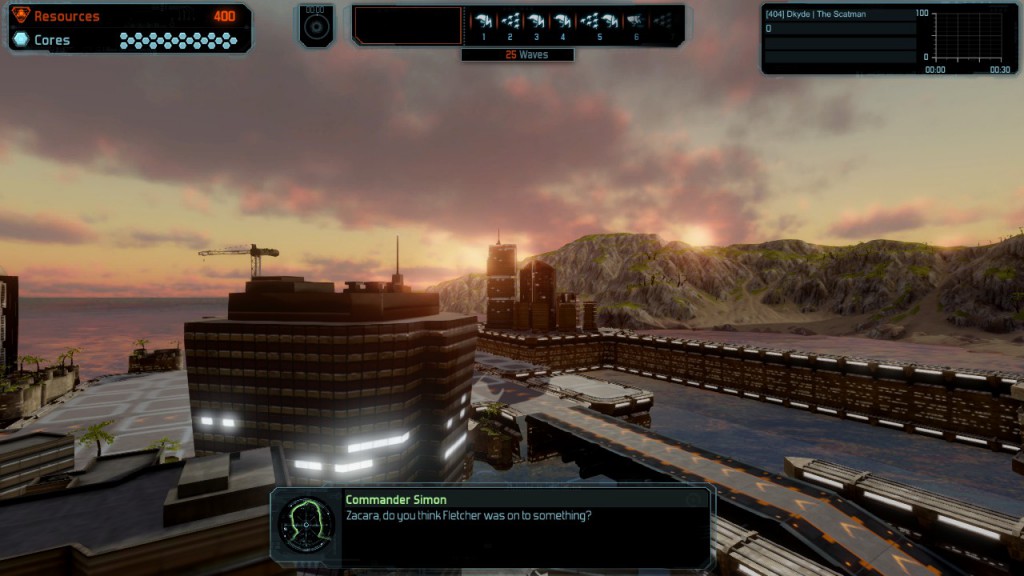 Five planets with four missions on each in increasing difficulty welcomes the player. Each map may furthermore be played in 12 different game modes – beyond the story mode!

Developing and funding Defense Grid 2 proved quite a journey, but it is evident that the passion towards the series through all these years was kept intact. Developer Hidden Path Entertainment manages to take the best bits from the original and refine them even further to both please and welcome old as new fans. Whilst the game graphically doesn’t meet today’s standards, its challenging and simple gameplay compensates and ultimately provides a very solid game unlike any other in the genre. Defense Grid 2 is currently the game to get if you are looking for a Tower Defense game as everything about the game screams tower defense.

Heavily inspired by the War of Currents in the late 1880’s, platformer Tesla Breaks the World by developer Archetype Global introduces the player to a gorgeous hand-drawn world with an impressive story covering the extreme rivalry between Thomas Edison and Nikola Tesla.

An interesting story with an even more interesting and impressive visual presentation. Welcomed by hand-drawn artwork – referring simply to graphics is not justified – inspired by classic cartoons, abstract and modern art and the works of Eyvind Earle, the player is instantly engrossed in the colourful world. Our protagonist and enemies are moreover animated very well and accommodate the overall design nicely – some players might even draw parallels to some of Disney’s newer character-designs. 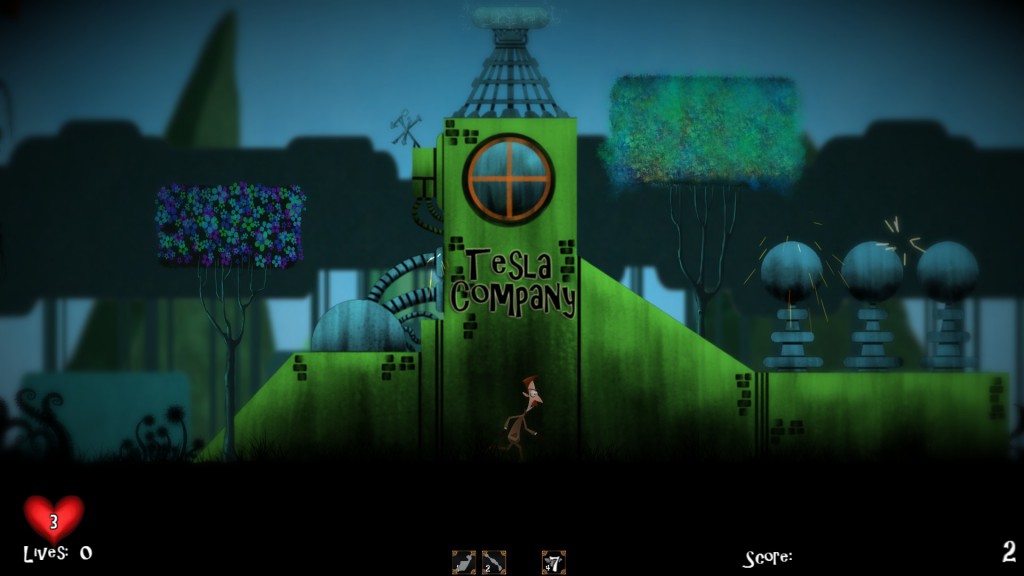 What can possibly go wrong…

Tesla Breaks the World is a traditional 2-D-platformer with the standard controls (jump, double-jump, left and right), but a few elements greatly sets this game apart. In particular the map design which, more or less, is randomly generated. This is great for replayability and ensures that no stage is too alike whilst utilizing a very interesting and innovative approach to the otherwise stagnated 2-D platformer-genre. Furthermore, Tesla’s latest invention, the Micro-Portable Magnifying Transmitter Device (a very fancy name for an equally fancy teleportation-gun) allows players to absorb various elements and enemies and place (or throw) them at desired locations allowing for some interesting gameplay options.

In addition to the above, zombies will spawn depending on how fast (or slow) the player solves puzzles and how often they use their Transmitter Device. This encourages players to solve puzzles and overcome obstacles efficiently as not doing so causes more enemies to spawn. Similar, as the player progresses through the stages, more items are being unlocked – for instance an electric-powered hover-platform which allows Tesla to overcome larger jumps and heights. A narrator is furthermore accompanying the player through the stages; constantly having a witty tone which together with the art exudes the passion the game has been developed with. 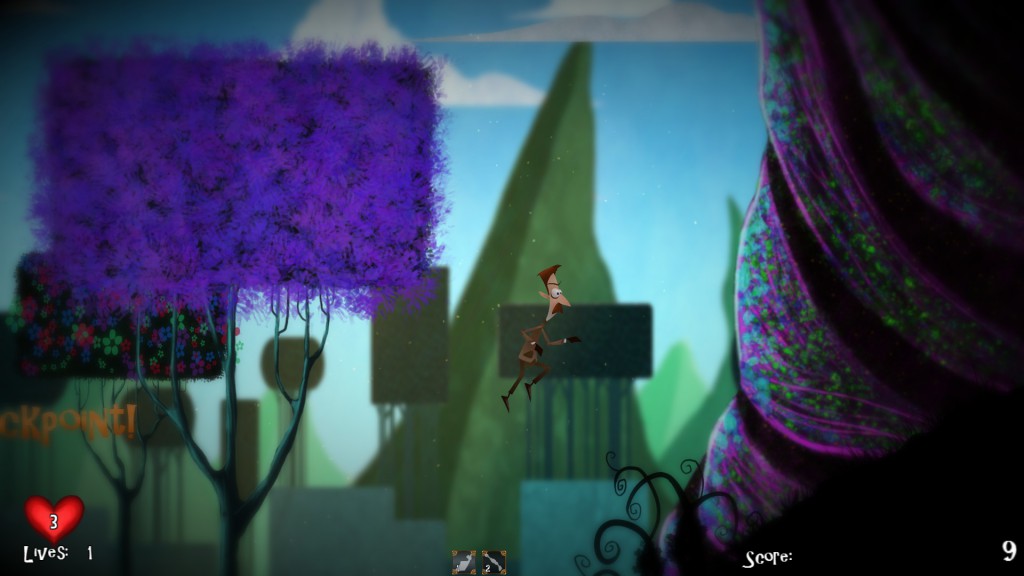 …definitely not Thomas Edison going mad and stealing your blueprints! The artwork throughout the entire game is very charming and very well made. Animations moreover suit the environment nicely.

Unfortunately Tesla Breaks the World faces some serious issues when it comes to the actual controls. Whilst the initial design is flawless, the game unfortunately executes all commands poorly causing them to feel slow and unresponsive. Tesla almost floats when jumping, and gravity seems to be slightly too low. The main issue overall is the poor framerate – which also appears to be the main reason why the controls feel floaty.

The framerate issues are especially bad when VSync is activated – causing the game to constantly perform under 30 fps despite being capped at 100+. VSync is in general an awesome feature as it synchronizes your frames per second with your monitor’s refresh rate and – if performing correctly – delivers a much smoother experience. Disabling VSync does increase the framerate significantly, but it is still struggles to deliver a smooth gameplay. This is a huge shame, because everything else is really well-made – all from the voiceovers, artwork and story. 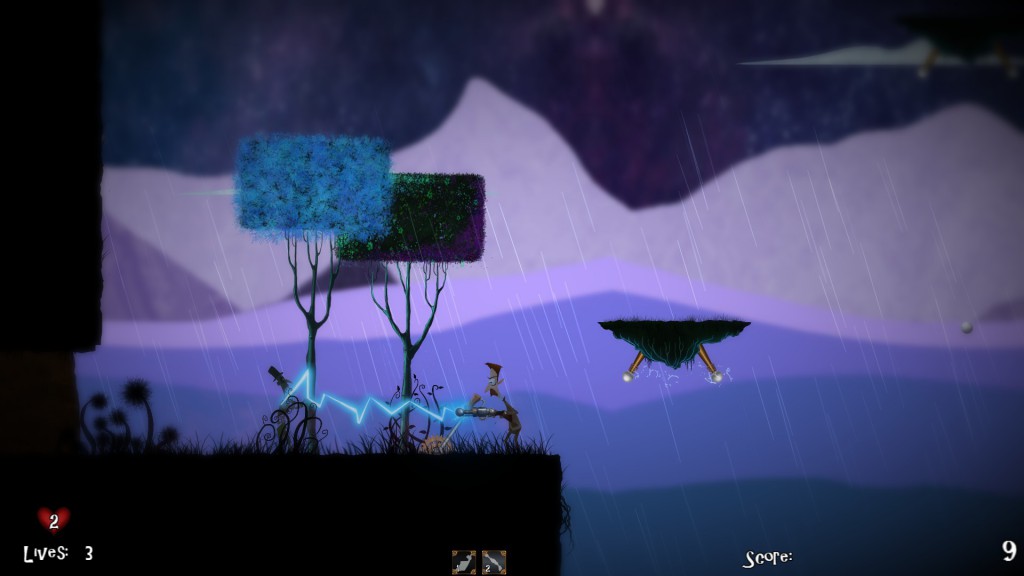 Several elements, including weapons and randomly generated maps together with the artwork, makes the game very appealing.

Tesla Breaks the World is the product of both a successful Kickstarter campaign, a successful GreenLit and fourteen months of hard work from the part-time indie developer, Archetype Global. It offers an engrossing story in very appealing and charming visuals utilizing hand-drawn elements and dark silhouettes, but fails at its technical performance. The game is, unfortunately, at current state facing serious issues performing to a bare acceptable level, but this is no doubt something which the developer intends to fix. This review will be updated accordingly to give a very warm recommendation, should a patch arrive.