Playing a game usually means having and following a comprehensive and at times complicated recipe; but Fenix Rage by Green Lava Studios shows that the recipe may be as simple as making cookies. Unfortunately I cannot make cookies. Instead, I must accept fate and cope with a slowly boiling rage and frustration as I enter the inevitably lead to death the thousandth time.

Fenix Rage appears relatively simple at first glance with easy and very responsive core-mechanics. The player is given the ability to use infinite double-jumps and a special quick-dashing technique – each action may be cancelled by moving differently, should the player wish to do so. However, with the intriguing and highly challenging map design the controls are very hard to master accordingly. The charming graphics are merely a cover for the inevitable death and perilous environment.

Surprisingly, the gameplay itself is even simpler than the controls as the charming platforms are loaded. The game offers two approaches on each map – the player may either choose to go for speed and thus optimize their run flawlessly and compete on the leaderboards, or they may attempt to collect all cookies at the cost of time. I say two approaches because attempting to do both successfully simultaneously is, more or less, impossible – something which undeniably teases you to complete each map more than once to obtain both things. Naturally, the maps furthermore get increasingly more complicated as more hazardous puzzles are introduced as well as unforgiving bosses being unleashed.

The different puzzles moreover introduces some very interesting and unique gameplay as coordination and positioning suddenly becomes a crucial part of completion. Similar, each boss (and there are many!) is unique and forces the player to develop different strategies to defeat them. Failing to do any of the above means death and a complete restart of the map – there is no health bar, start-from-where-you-died or anything slightly forgiving. A range of new puzzles are being introduced as the player slowly progresses through the maps and worlds. All maps are furthermore unique and requires their own, specific approach.

The maliciously designed obstacles unavoidably means that the player is going to die. A lot. This aspect requires Fenix Rage to find the perfect balance between frustration, rage and a slight humiliation of the player’s self esteem. There are no excuses whilst playing Fenix Rage – you either understand the map, obstacles and control the movement flawlessly, or you die. Moreover, understanding the map becomes increasingly more relevant as the player advances from the ten-second maps – something which brutally bumps up the difficulty promptly and significantly. Completing a map thus requires either an incredible lucky run or full control of the movement – and rewards both relief and a feel of accomplishment.

And as if completing the levels normally wasn’t enough, the game offers two extra options (Challenge and God). The challenge-mode requires the player to complete the map on limited jumps / dashes – something which often results in having to time each jump perfectly to not waste a single pixel. The god-mode offers a whole new way of playing as the player now is required to touch all obstacles in a seemingly impossible amount of time. Approaching the levels as an explorer and observer will help generate an understanding of the obstacles.

If you aren’t prepared, Fenix Rage will tear apart and humiliate your self-esteem and everything you thought you knew about mastering platformers. Fenix Rage is truly testing your skill (and at times what feels like your sanity), but Green Lava Studios understands how to balance the ocean of infuriating moments with the rewarding sense of accomplishment when completing a level. If you are up for a challenge and master anger management as well as platformers, Fenix Rage is a must-have.

As a seasoned gamer, I usually approach games with a clear assumption and expectation that I can complete them somewhat straightforward. This illusion was completely shattered and humiliated after just one minute in the fast-paced and unforgiving world of Velocibox. The amount of deaths was nearly proportional with the amount of seconds played, and after just ten minutes I seriously questioned my abilities to even reach level two, let alone complete the game in level eight.

Introducing and completely reforming the endless-running genre, Velocibox invites the player to a very high-paced game with a constant momentum where dodging and twitching once again becomes crucial for survival. Minimalistic and very bright colours welcomes the player upon loading the game, but after a quick tutorial, the aforementioned bright and welcoming colours show their real face together with the controls and game speed. 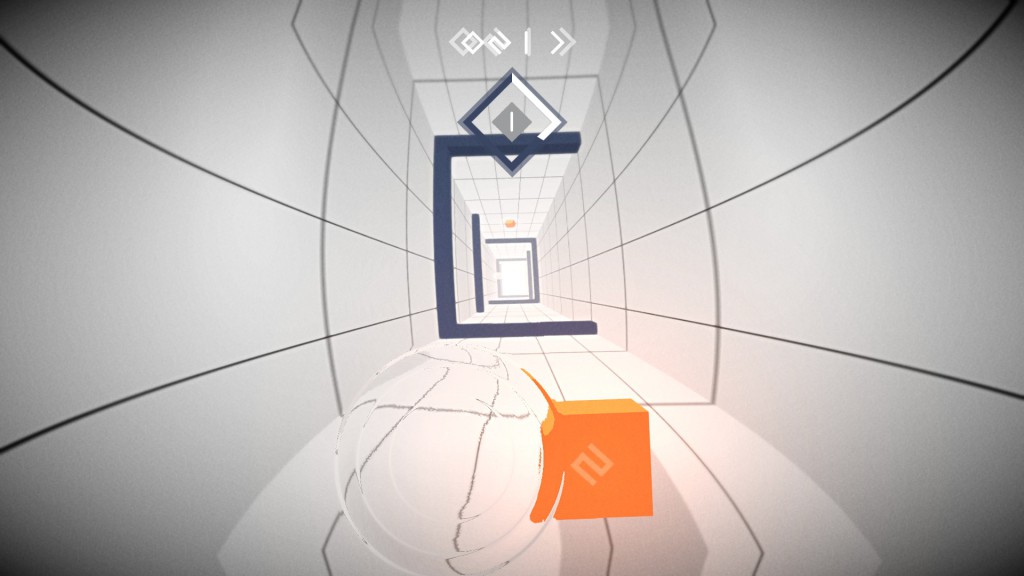 All four walls may be utilized in the hunt for boxes and never ending struggle of survival.

The endless-running genre has been around for ages, but recently experienced its renaissance through iOS and Android games such as Temple Run and Subway Surfers in the previous years. Though, while they may share the same rouge-like elements (no pausing or resetting), then Velocibox is very unique due to the controls and graphics. Unlike most other endless-runners, you are allowed to utilize the ceiling and walls (in fact, you are more or less required to do so). This means that all obstacles may be completed in different ways – all depending on the next obstacle, certain approaches may be preferred. And with 70 different patterns there are a lot of options – and a lot of frustration when your plan fails miserably.

Additionally, the cubes needed to advance to the next level are rarely placed in line; thus forcing the player to hunt these while spinning and dodging obstacles. The player is required to collect six cubes to advance to the next level, though these may be collected when the player see fit – the level will continue to run until the player catches six cubes or dies. Your score, however, is depending on how fast and how many boxes are collected – the more cubes as fast as possible, the more points. The player is thus encouraged to take chances for a higher score – and with integrated Steam Leaderboards, this becomes very relevant. 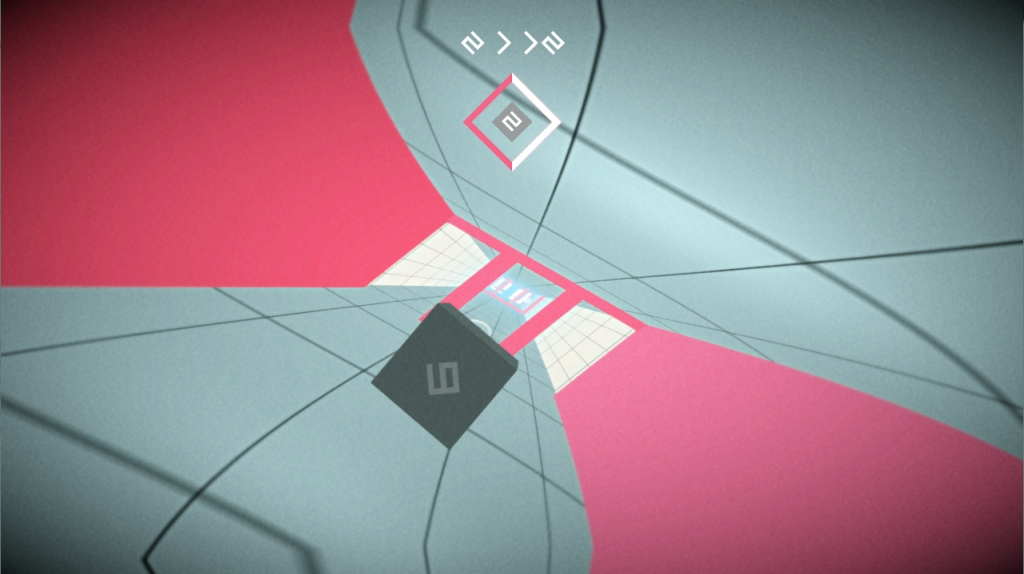 Mastering the controls while comprehending the camera movement and constant speed is a strong indicator that Velocibox indeed is a skill-based game – somewhat similar to games like Super Hexagon. It requires fast reflexes and a seemingly impossible overview – though, with enough tries the player learns how to approach the individual obstacles and master the controls properly. However, once the player finally advances to the next level, the aforementioned colours turn out to be a real enemy; because while the controls are essentially the same, the drastic change in colours means a loss of the vague overview. Similar, each new level introduces new obstacles – something which ultimately means the player is forced to slowly progress as they master each level better and better. The better they master the first level, the easier they may approach the second, and so forth. 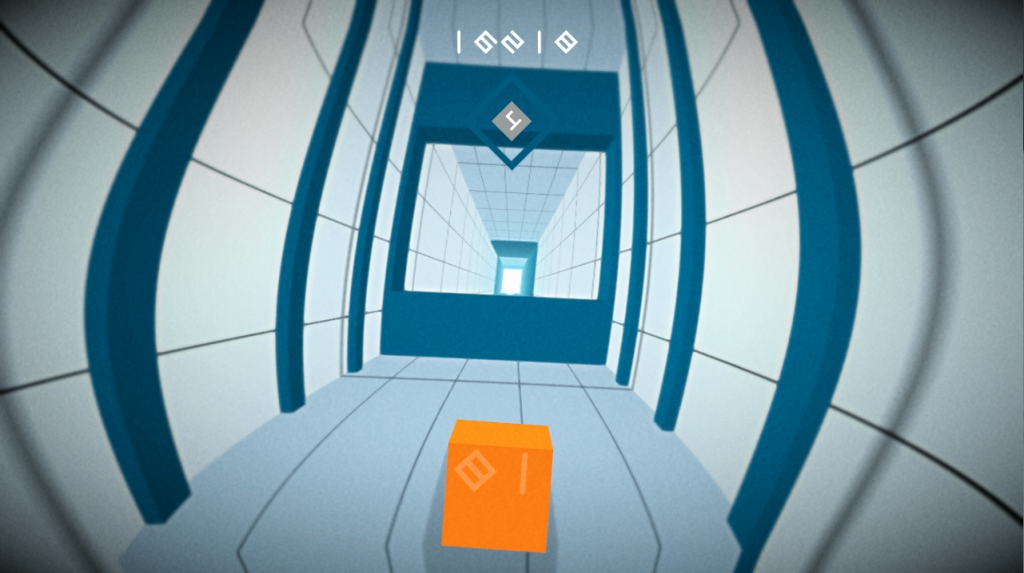 Each new level introduces new – and at times unforgiving – obstacles.

Velocibox is an extremely challenging and fast-paced game with minimalistic graphics and a very intriguing gameplay. Advancing through the levels requires patience and a great amount of concentration – and despite the thousands of tries, the game still remains fun, entertaining and extremely challenging. The key is undeniably to master your reflexes and understanding the art of re-orientation, and doing so successfully is highly rewarding. Don’t be put off by the first many failed attempts, but rather try and experience the satisfaction by reaching level two (and three, and four, and…) . Good luck!

A press copy was kindly provided by the developer for reviewing purposes.